Showing posts from January, 2007
Show all

The following has been posted at former HELLOWEEN singer Michael Kiske's website:

Project with Kai and Grapow confirmed...

The project now is not a rumour.

So in the (near) future will be a project with Kai Hansen (ex-Helloween, GAMMA RAY), Roland Grapow (ex-Helloween, MASTERPLAN) and Michael Kiske as singer.

Roland Grapow has said in a recent interview for a Spanish web laEstadea.com. An excerpt from this interview is below:

Q: About Hansen and Kiske, there's a rumor of a project. Is that right?

Grapow: "It’s not a rumor, it's true. We’re just waiting for the right moment. We gathered together two or three times in the last two years. What happens is that Michael doesn’t want to do anything with too much hard rock or too much heavy metal, too much dark or negative, he wants to do something more happier. So, probably, when I finish the tour with Masterplan, I’ll begin to write some tracks for Mike. Kai too, we’ll see what will come …
1 comment
Leer más »

"Grindhouse" Will Be Missing Sections

We've seen that Quentin Tarantino and Robert Rodriguez will be artificially adding dirt and scratches to all the prints of their upcoming two-film action-fest "Grindhouse", well now they're taking the sleazy look even further.

Speaking with The New York Times, Tarantino revealed they both have 'purposefully cut out' a segment from their films - and replacing it with a brief 'Missing Reel' image.

"When it pops up 'Missing Reel,' the entire theater is going to scream. They might very well be screaming my name: 'Quentin, you bastard! We hate you!'" says the "Pulp Fiction" director.

The aim of course is to recreate the sleazy $1 movie theatre experience. Nice.

Frontiers Records is proud to announce the signing of a brand new and exciting musical project.

Timo Tolkki, the Finnish Grammy award winning guitar player who has sold 1.5 million records with his power metal genre pioneering band STRATOVARIUS, has taken the next step in his 20 year music career.

SAANA - WARRIOR OF LIGHT is a Classic Rock Opera featuring seven characters and numerous musicians (including Tolkki himself) who will collaborate in this ambitious project. The result is a unique sound, unlike anything ever heard before… from soaring majestic heights to soft and gentle moments and everything in between. It also tells a very dramatic tale.

Saana - Warrior Of Light is the story of a woman who makes an unforgettable journey that changes her life and view of the universe forever. On her journey, she will discover the biggest secret of mankind… and her own destiny.

New live performance footage of Nebraska-based power metallers CELLADOR, performing their track 'A Sign Far Beyond', is available for viewing on the Underground Video Television website at this location.

The footage was taken at The Palladium in Worcester, MA last year during the band’s tour with TRIVIUM.
Post a Comment
Leer más »

BW&BK has received the following letter asking us to help find a "metal family" to be featured on ABC Television's hit reality show, Wife Swap:

My name is Rachelle Mendez and I'm a Casting Producer for ABC Television's hit reality show, Wife Swap. I'm conducting a National Casting Search to find Metal Fans to feature on the current season of our show, and am contacting you in hopes of discussing the possibility of working together to find a family who we can consider casting.

Wife Swap is a family show on ABC primetime. The premise is simple: two moms from two very different families get the opportunity to swap lives (but not bedrooms - everyone has their own!) for a week to experience what it's like to live a different lifestyle - and to see what they can teach each other about their own lifestyle!

We want to feature a fami…
1 comment
Leer más »

NO a las series mutiladas

Acting veteran CHRISTOPHER LEE has launched a music career at the age of 84 - releasing a CD of songs including a heavy metal track. The Lord Of The Rings star is convinced he is the oldest rocker to record an album.

He says of Revelation, "I really believe that when people hear this CD they will say, 'Yes he really can sing.' And it is a unique recording. As far as I know no other man of my age has sung on an album."

And Lee believes it will be a hit with young and old fans: "This has to be something that people can connect with. You see the young will connect with the metal version of 'The Toreador March', even though it is sung in French. I'm not singing in heavy metal, but it is still heavy metal." <- lo de rhapsody le ha afectado XDDD

But Lee has no plans to take his music on tour - insisting, "Not at my age. I don't think I could go through that.…
Post a Comment
Leer más » 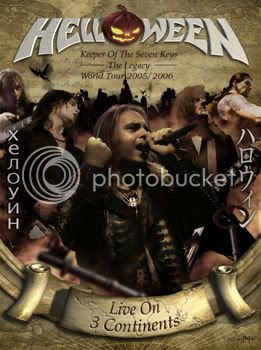 Final Concert of the Last Album of the German Power Metallers!!! Final Album Sucks for Me, but They Play Catchy Old Songs!!!
Limited Edition!!!

nb: Yoshiki told the show host that he could only play one handed cos of the pain in his other arm~

It seems as though the content for the show will include:

- A view of Yoshiki's recording studio
- Yoshiki on the drums and piano
- A party at Yoshiki's house (including musicians he's working with..presumably VUK members)

NIGHTWISH - Vocalist Auditions Completed; New Singer To Be Announced In Late May

Finnish metallers NIGHTWISH have updated their website with the following message:

"The auditions for the new vocalist have ended, with more than 2,000 demos sent to us. (yesterday, January 15th, we received 120 demos!) A big thanks to everybody!

So please don't send anymore demos, since now we need to concentrate on finishing the album recordings.

The new vocalist will be announced at the end of May, together with the release of a new single."

Tagline: There are 40 million sheep in New Zealand....and they're pissed off!